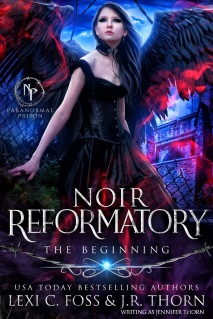 Happy Birthday, Raven. Welcome to Noir Reformatory.
Not what every girl wants to hear on her 18th birthday, but I accepted my fate long ago. I was born with black wings, earning me a permanent jail sentence from day one.
A Noir Angel for life.
That’s fine.
I’ll own this prison just like I did back home.
Even if it’s ruled by two hot kings.
This reformatory isn’t all-girls; it’s co-ed. Which means I’m outnumbered ten-to-one by brutes with more brawn than brain. Not a problem. I thrive on aggression and this place is riddled with it. A nightmare wrapped up in an ebony cloak.
Well, bring it on, boys.
Just try and claim me.
Note: This MMF standalone romance novel is part of the Paranormal Prison collection and the start of a brand new MMF series by USA Bestselling Author Lexi C. Foss and USA Bestselling Author J.R. Thorn writing as Jennifer Thorn. 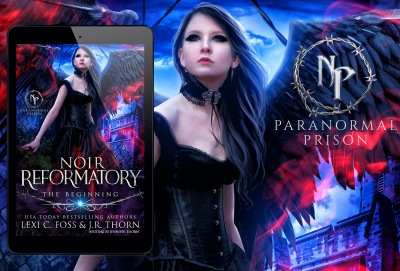 Pent-up rage and aggression from the arena caught me in the balls, spurring on our movements. Knowing she had to watch, had to listen, had to observe our every touch, only pushed us along.
I could hear her breathing, could feel her growing heat, and knew we were awakening something inside her. An intrigue that neither of us would fulfill unless she really begged.
She hadn’t earned it.
Had tried to fucking end me.
And it was on that note that I came in my pants, Zian never having touched my bare skin, his grip knowing and steady.
I yanked on him in kind, infuriated that he soiled me in such a way but turned on at the same time, my pleasure humming up and down my spine. Totally unfulfilled yet oddly complete.
My gaze found our little voyeur as I kissed Zian through his own climax, his seed warming my torso. I invited her to join us with my eyes, to lick the sticky substance from my skin, but she remained in her little corner, those black irises pulsating with bemused innocence. Better for her because she was nowhere near ready to play.
Just as we would likely never allow it.
Intimacy required trust.
And she hadn’t earned ours.
If anything, she’d only acquired our hate. Which was truly too bad because, in this place, she’d need an ally. And I wasn’t all that inclined to help her after our last experience together. Although, I knew I would, purely out of obligation to her rare existence.
“I hope you can fly better than you did yesterday,” I told her softly. “Because you’re going to need those wings, little dove.”
Zian sighed in contentment, his head hitting the pillow. “I give her a week, tops.”
“Yeah?” I smiled, amused. “I give her maybe a day.”
“Wanna make it a bet?”
“Absolutely.”
“Cool. Winner gets on his knees,” Zian decided.
Of course he would choose that. Because I would, too. “Works for me.” 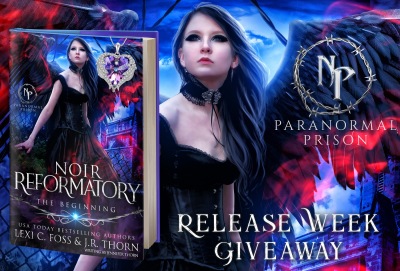 USA Today Bestselling Author J.R. Thorn is a Reverse Harem Romance author. All her books are written in the same world except for co-write books, so be sure to check out the recommended reading order listed on AuthorJRThorn.com! (She’ll also admit to having an unhealthy obsession with magical tattoos and alpha males.)

USA Today Bestselling Author Lexi C. Foss loves to play in dark worlds, especially the ones that bite. She lives in Atlanta, Georgia with her husband and their furry children. When not writing, she’s busy crossing items off her travel bucket list, or chasing eclipses around the globe. She’s quirky, consumes way too much coffee, and loves to swim. 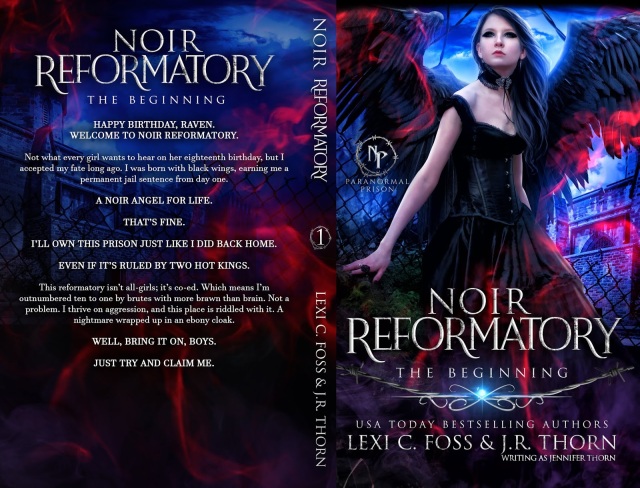