Hi, my name is Clara and I am an Omegaverse junkie. If it’s Omegaverse, odds are that I’ve read it, or I’m about to read it.

I started my journey back in 2017, when I read my first MF Omegaverse books. Before I read them, I didn’t have much of a clue as to what the Omegaverse was. When I finished, I had at least a guess. Then I went looking for more MF Omegaverse on Amazon. The thing is, there really wasn’t any. What I did find was a lot of MM Omegaverse, including mpreg.

So, a couple of weeks ago, when I talked about what I saw as the differences between MM and MF, I got another question. That question was what made mpreg so popular. I was like, hmmm, good question. And then I promptly fell down the rabbit hole. Google, at the best of times, can lead you all over the place. I saw pictures, read interviews, read stories, and just in general, got lost.

Now, after reading all that, I still can’t tell you what makes it popular in Omegaverse, but I can tell you that male pregnancy isn’t a new thing. It shows up in all kinds of mythology. And I was surprised to find out that modern mpreg actually predates the Omegaverse. Mpreg first started making its entrance in the ’80s. Then it showed up in Hollywood, in a movie with Arnie, Danny DeVito, and Emma Thompson called Junior. It sucks, don’t watch it. Then mpreg met Omegaverse, and a marriage made in heaven happened.

One of the things that I wondered, back when I was thinking about reading mpreg, and a question I’ve been asked, is where exactly does the baby grow, and how does the baby get out. I mean, I’m not seeing a cock stretch out wide enough for a baby to come out. So I ended up getting a little anatomy lesson when I started reading. I can make it slightly easier on you. Let me see if I can find the picture I found a couple of weeks ago. It shows the anatomy of a male Omega. 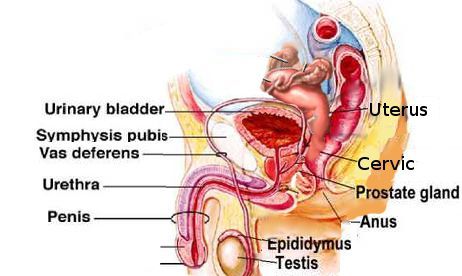 This isn’t the exact one, but it’s close enough. You can see that the uterus is in between the bladder and the bowels, and it appears to share a track with the bowels down to the anus. In most MM omegaverse, there’s a flap that covers the cervix and entrance to the uterus and is generally only accessible at certain times, like birth and heat. In some of the MM universes, the sperm gets to the uterus through the anus, but the baby is born through an Omega hole that is in between the testicles and the anus, and which doesn’t always exist. In fact, one series talked about how that hole would rip open during birth. Yeah, no. That just sounds really painful to me.

In the MM Omegaverse worlds, the Omegas tend to be very fertile and contraceptives tend to have a relatively high failure rate, especially during heats. The Omegas can take suppressants that will help suppress their scent and their heat. It may not keep them from the full effects of their heat, but will keep it under control. There are also contraceptives they can take, as well as condoms. Some books have special condoms for the Alphas that will fit over the knot. Abortions are generally nearly impossible, or have to be done surgically.

If you are interested in reading mpreg Omegaverse, there are a lot of authors that do a really good job. My favorites in the genre are Anna Wineheart, Susi Hawke, and Piper Scott. Anna’s stories tend to be longer, with a lot of angst, but good angst. She has the Men of Meadowfall series, and her books are almost all within that world, and you get to run into old friends regularly. Susi has several series, some she’s written on her own, some she has co-written. Some are shifter books, some aren’t. Her stuff tends to be a little shorter and often has a lot of funny added in, especially if you read the Hollydale books. They are a little touched by magic, and Tom, an Omega in the story, is completely fabulous. Piper has cowritten with Susi, and their series is about dragons, complete with eggs. She also has two interconnected series, His Command and the Single Dad Support Group. His Command is about a group of friends getting their families together. The SDSG is their kids. I watch for new releases from these ladies, as well as Crista Crowne and Claire Cullen. In fact, Susi and Crista just had a new book release on the 7th. And yes, I’ve already read it.

OK, hopefully this helped answer some questions, because you know I’m all about that. If you have more questions about Omegaverse, or anything else, I will do everything I can to answer. Remember, I’m not an Omegaverse expert, nor do I play one on the Internet, I’m just an uber-fan that reads everything I can.

2 thoughts on “MM Omegaverse and Mpreg”