Welcome to the first blog post of the day. Later on this evening, you’ll be getting the newest addition to the Blacklight series. But for right now, you’re getting Draekon Heart, the third book in the Exiled to the Prison Planet series.

Before we get started, I just have to say that I get a little bit of a giggle every time I see Lili Zander’s name (yes, I know it’s a pen name for Tara Crescent), because the last name Zander is in my family history not too far back. Well, enough of that little digression, back to the hot dragons and tough women.

Quick reminder on the back story. The Zorahn were talking 10 women to their planet, basically to act as guinea pigs for science. One of the Zorahn on the ship sabotaged it and they crashed on the prison planet where the Draekon are exiled. Draekon are a mutation of the Zorhan, and can shift into dragons when they find and claim their mates. Draekon always mate in pairs, so the series is a MFM menage series.

When the ship crashed, the women got separated. Some of them went with the main group of exiles. Well, I say main, but I mean main as in the exile group that we’ve focused on so far. Some of the other women were kidnapped by another exile group, which we haven’t seen anything of, until now. Backstory over.

DH is the story of Ryanna, Zorux (Surly Draekon most of the time and Sweet Draekon sometimes), and Thrax (Sexy Draekon).

By now, it’s been 3 months since the women crashed on the planet. We’ve already got 2 happy trios, but no new ones. The rainy season has ended, so it’s time to start acting on the information that Beirax gave them about the supply and Cloakship drop, and time to try and find the other women that were kidnapped.

So, we open with Beirax being sentenced to exile. The dragons are going to put him on a high plateau that he will not be able to escape from since he can’t fly. He isn’t real happy about that and he yells at Arax for wearing symbols of royalty, which, technically Arax is allowed to do, being the Firstborn and all. Arax then says that even if they are on another planet, he will uphold all the laws of their planet. That makes Zorux withdraw somewhat.

Ryanna has done everything she can to be useful and to learn all the skills that she can to survive on this planet. She’s gotten Zorux to teach her how to throw knives. Thrax and Zorux have helped her come up with a mark that she can leave so that she can be tracked when she’s out hunting. She has also done everything she possibly can do to make sure that she doesn’t fall in love with any of the Draekon, but Zorux and Thrax are both very sexy, and Thrax is a congenital flirt. Ryanna sleeps with a knife under her pillow because she was in an abusive marriage and she managed to escape, but her ex came after her. She knows that she’s on another planet and he has no way of getting to her, but that doesn’t stop her from being afraid. Fear is like that.

Anyway, Arax decides that he, Nyx, and Olivia will go looking for the other women. Dennox, Vulrux, Harper, Raiht’vi, Thrax, Zorux, and Ryanna will go to the ship, get Beirax’s tracker, and find all the Cloakship pieces. They don’t get very far before they realize that Harper is sick. Raiht’vi points out that nope, Harper isn’t sick, Harper is preggers. Vulrux, being the group’s doctor takes her home, while Dennox flies everyone to the ship and then to a base camp site and goes back to Harper.

So there we are. Ryanna, who keeps trying to think of her pants as nun’s pajamas, is left along with two Draekon who she’s been trying, rather unsuccessfully, to not fall in lust with, and Raiht’vi, who is warming up to people, slowly but surely. However, she’s got her own secrets and she’s afraid.

Before I put up my excellent Dragon of Protection, let me tell you that this series is getting better and better. Each book has increased the stakes, and this one really, really did. OMG, it really did. These are not standalone stories, you do need to read them in order to get the whole story since they do build on each other. That means you are getting a cliffhanger-ish ending for the story as a whole, but Zorux, Thrax, and Ryanna get their HEA, so that part’s all good. There is some really hot sex, because of course there is. There are a couple of places that could be triggery to people who have survived DV, but they are short and not too bad. 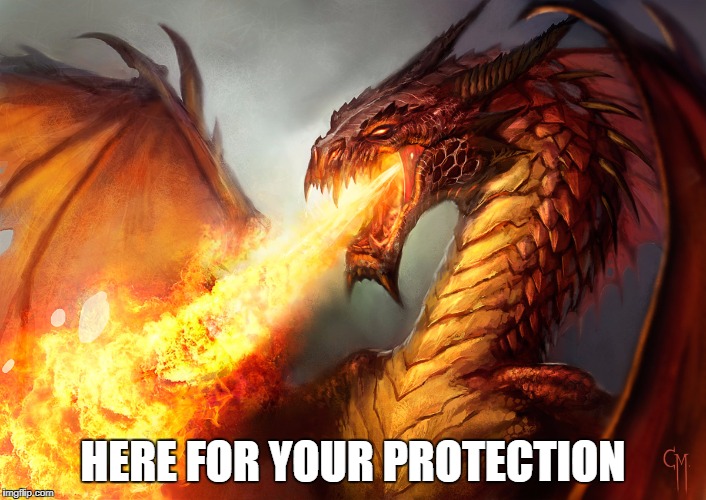 Ryanna, while she is really attracted to both guys really wants to protect herself from being hurt again in any way. She worries about falling for them because she doesn’t figure that she is their mate because they didn’t turn into dragons the first time they saw her. In fact, they’ve all been around each other for months now and nothing has happened. And now that Harper is pregnant, Ryanna worries about bringing a child into it and then they find another woman as their mate.

Zorux is worried because he has a secret. While his tattoos show that he is a Highborn, the fact is that his father faked being a Highborn. When his mother found out, she killed him, one of Zorux’s sisters, and herself. She made Zorux promise to kill his younger siblings and then kill himself. It is the highest of the high crimes to fake your birth station. If the authorities were to find out, his siblings would die, their bondeds would die, their children and etc would die. So, when Arax said that he would enforce the laws of his world, that really scared Zorux even more.

I know I haven’t said much about Thrax, but he is a pretty mellow guy. He flirts a lot of Ryanna, doesn’t have a lot of angst in his story, and is pretty nice, all around. He was an orphan and was a pilot. When Zorux tells him his story, Thrax is pretty calm about it. He says that he’s learned that people are more than what their birth station is.

Obviously, because they get their HEA, Thrax and Zorux turn into dragons. There had to be some emotional breakthroughs to get to that point.

We find out more about Raiht’vi, but she’s still kind of mysterious. We also get a glimpse into Olivia, one of the women in the other group. Her story looks to be intense.

Wow, this is long. Bottom line? I loved the story. I love the Draekon and each book gets better and better. I can’t wait for winter for the next one! Meanwhile, happy reading!